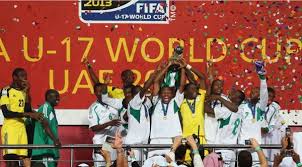 EAGLET BEAT MALI TO RETAIN U17 WORLD CUP
The Golden eaglet of nigeria beat mali u17 to win the u17 world cup in Chile . with this, nigeria has now won the trophy for a record 5th time and back to back.
The Golden Eaglets brought down Les Aiglonnets in Vina del Mar to lift the U17 World champions for a record fifth time

Mali’s dream of lifting a first ever Fifa U17 World Cup faded in thin air in Viña del Mar as they crumbled 2-0 to Nigeria at the Estadio Sausalito.
Second half strikes from Victor Osimhen and Funsho Bamgboye were all the Eaglets needed to become world champions for a record fifth time, and the second country to successfully defend their title after Brazil.
The tournament’s outstanding team failed to repeat the fluency and genius of their 3-1 semi-final romp against Mexico, but Emmanuel Amuneke’s team found two more sumptuous moment during the second half of game.
Nigeria had a chance to get the lead in the opening minutes of the encounter when Osinachi Ebere had his penalty saved by Samuel Diarra after Chato had been punished for handling the ball in his penalty area.
That miss seemed to have disabilised Amuneke’s boys as they lost their rhythm with goalkeeper Akpan Udoh putting an awe-inspiring display to prevent his side from going behind. His most outstanding moment in the first half was tipping over the cross bar Boubacar Traore’s header that was heading for the net.
Kelechi Nwakali, Osimhan too had their chances but goalkeeper Diarra was just too dazzling to be beaten.
On resumption of the second half, the newly crowned champions were forced to make an early change with Ebere finding his way on the substitute’s bench. And few minutes later, the Golden Eaglets got their curtain raiser.
First, it was Osimhen who added his tenth of the tournament to become the first player in the history of the competition to score in every games of the championship before hardworking Bamgboye doubled the lead three minutes later.
Mamadou Fofana drilled a free-kick into the defensive wall, prompting a Nigeria break on which Aly Malle shot across the face of goal. And not too long, Udochukwu Anumudu smashed a thunderous effort at goal, which rebounded back off the crossbar and was cleared away.
Towards the closing stages of the game, the Malians tried everything within their reach to force a comeback but the dazzling Eaglets held their nerves, thwarted every attacking forays of the opponents and ended up as world champions for the fifth time.