Kendra Wilkinson says she was never friends with Holly Madison: “What we did was just f**k the same man” 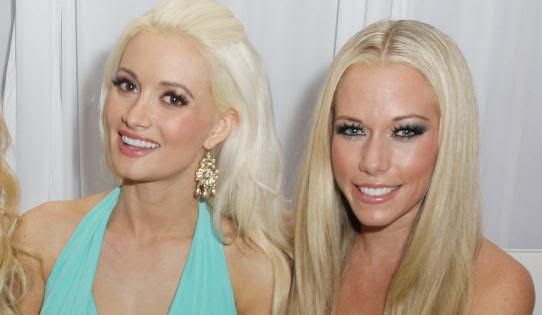 Drama! In her recently released memoir, ‘Down the Rabbit Hole’, the former Playboy bunny, Holly Madison writes that her former housemate, Kendra is the “fakest person I’ve ever met,” and other not so flattering details.
In a clip from an episode of her reality show, Kendra tells a friend how she really feels about Holly Madison and her memoir.
“What Holly is saying is extremely false. I’m like, where did this s-t come from? She writes a book putting rumors out there about me all over the Internet and stuff. It’s just absurd. Seven years later and this bitch is talking about shit that happened while I was fucking 18, 19 and 20. At the end of the day, what we did was just … fucked the same man. That’s not friends.”
After explaining to her friend that the stories in Madison’s book are “extremely false,” the 30-year-old added,
“How dare her try to write my story and tell people what my intentions were when I know my intentions. She never knew my intentions. She can’t go in my fucking brain and tell people what my intentions were.”
As the end of the clip she was heard saying:
“I ‘m not going to let this bitch get away with something like that”

What’s Affecting My Productivity: My Mindset, Location, Or My Village People?