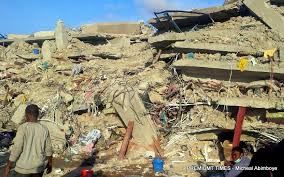 Justice Ibrahim Buba of the Federal High Court, Lagos Friday adjourned ruling till November 2, 2015, on preliminary objections  filed by one of the engineers who built the collapsed Synagogue Church Of All Nations’ building, Mr. Akinbela Fatiregun.

Fatiregun who was indicted by the coroner put up to investigate the collapsed building in Synagogue church had dragged the Lagos State Commissioner of Police, the Council for the Regulation of Engineering in Nigeria and the Attorney-General of Lagos State before the court.

The engineer is seeking an order of perpetual injunction restraining the Commissioner of Police, Lagos State from arresting, detaining, investigating or prosecuting him based on Komolafe’s verdict and recommendations.

The respondents informed the court no one indicted the builder, and that all that was recommended by the coroner was police investigation and if found culpable, charge the builder to court.