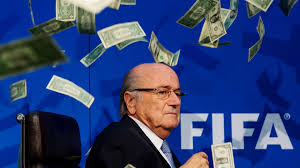 “JOSEPH Sepp Blatter,  FIFA President and institutional memory of world football, was pulled up by Swiss police on Friday, September 25, 2015 and his offices searched.

It was an expected move, and the Swiss, working as proxies of the United States (US) did not disappoint.  Blatter is being investigated “On suspicion of criminal mismanagement and-alternatively-misappropriation”

Ironically, America is not a footballing nation, and beyond seeing itself as the self-appointed policeman of the world, it is not clear where it derives its power to arrest people of various nationalities. Is it from the United Nations, Interpol, NATO or American laws?
Delegates had  gathered for the  2015 FIFA Annual Congress in Zurich when on May 27, the Swiss police seized fourteen of them based on warrants issued by the US Department of Justice. The claim is that they may be engaged in bribes and kick-backs of some $150 million over ten years.
Obviously, Blatter is the target, and the Swiss having acted on behalf of the US, might have appealed for some dignity and national pride in going after the most famous Swiss.  What America did was to carry out a campaign against Blatter, dig a deep hole round him by arresting and harassing his colleagues in FIFA, and moving in to have him plucked off.
FIFA is a powerful state with lots of funds. The Blatter administration has been so successful in raising funds that between 2007 and 2010 for instance, it had a surplus of $631 billion or an average $157.75 billion per  annum. Football is not just sports, it is also emotions; so much that youths in faraway  countries like Nigeria  engage in  fatal street battles over support for European teams. This is apart from the usual hooliganism amongst European club supporters. Football is religion which will account for a fan believing that the club he started supporting in his teenage hood must continue to win matches ten, twenty years later no matter the new realities.

Blatter
It is argued that politics should not be allowed in sports, but football is politics. That is why matches are like wars. And where there are no points or trophies to win, the matches are regarded as ‘friendlies”. Now, for such a powerful international force to be outside NATO control, might be intolerable.
There are two contending philosophies in  world football. To one, football is big business, requiring massive capital and deserving huge profits. To this school, the game is for the super-rich that can build stadia, hire the best legs and coaches, build formidable teams and leagues by poaching the best footballers around the world. This is the prevailing ideological school in the West.
The opposing school, sees football as a game that unifies humanity, can be played by  royalty and the ragged, the rich and the poor, and should be developed in every part of the world. To this school, belongs Blatter despite  the fact that he is European. His presidency has democratised football, built football infrastructure in the undeveloped world, and generally used the huge resources of FIFA to develop football.
In 2010 for instance, FIFA made extra payments of $550,000 each to 209 associations,  $5 million to each of its six federations,  and donated $100 million to South Africa, the host of that year’s World Cup; 80 percent of it for community development. Under its  Goal Development Project, the Blatter-led FIFA has given millions of dollars  to various football associations  to improve facilities including building headquarters  and  youth academies.
Under him, the much priced World Cup came to Africa for the first time in 2010, moved in 2014 to Latin America (Brazil)  it is billed to go to Eastern Europe (Russia) in 2018, on to Asia (Qatar) in 2022.
Blatter’s enemies
To  Blatter’s enemies,  the South African, Russian and Qatar hosting rights were secured through bribes. To them, distributing funds across the world under the Goal Project, amounts to misuse of FIFA funds and bribery to get votes. Indeed, the 79-year old, has had a strong staying power having joined FIFA, forty years ago as Technical Director and  becoming General Secretary, six years later. He  succeeded  Joao  Havalange as FIFA President  in 1998 after defeating then European Federation President, Lennart Johansson  amidst claims of vote-buying. When he ran in 2011, it was reported to be his last, but he came forward again this year. It was apparently an attempt to scuttle his chances that led to the Zurich arrests two days before the elections. Despite this and a clear indication that America and Europe do not want Blatter, he won the first round by 133 votes to Prince Alibin Hussein’s 73 votes. The Prince withdrew from the second round voting and Blatter was returned. But on June 2, just four days after his re-election, he announced he was stepping down and calling snap elections on February 26, 2016.
But his opponents are not sure he will keep to his words, so they want him out as quickly as possible. This is apparently responsible for the current offensive against him. His present interrogation is based on two allegations. That FIFA under Blatter, awarded  television rights to the Confederation of North, Central America and Caribbean Association led by the now indicted former FIFA Vice  President, Jack Warner for $600,000 while the Confederation retailed it for $20 million. FIFA’s response is that “the  contract was properly  prepared and negotiated”
The second allegation is  that FIFA  paid European Federation President, Michel Platini over $2 million in February 2011 for work allegedly done from January 1999 to June, 2002. While the accusation is that this is a “disloyal payment” Platini who is the leading contender to replace Blatter, said this was legitimate payment for his services to FIFA as technical adviser.
From FIFA presidential election results since 1998, it is clear that Blatter cannot  be removed through the democratic process, hence the need to harass and intimidate him to step down. An angry Blatter this week threatened to rescind his decision to quit. Although he is presumed guilty by  the powerful and rich countries, Blatter remains a friend of Latin America, Africa and Asia.”